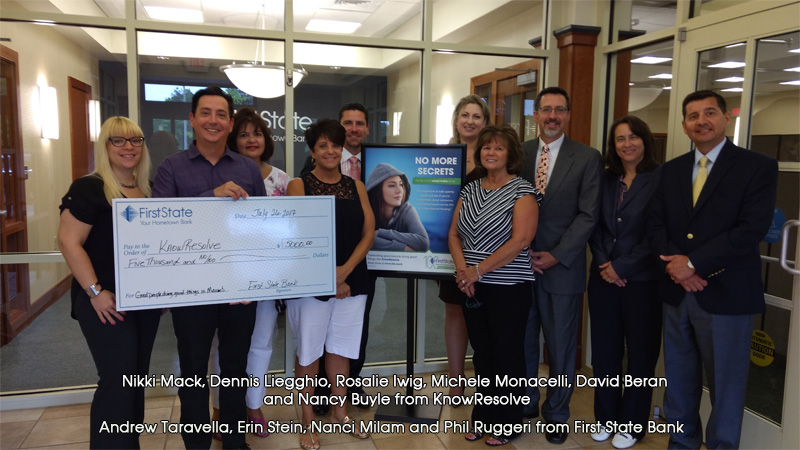 “KnowResolve is an inspiring neighbor and a valued customer,” says Gene Lovell, First State Bank’s president and CEO. “It’s a privilege to have this resource in our community.”

One of every seven high school students seriously considers suicide. Far too many go beyond contemplation. According to the Centers for Disease Control and Prevention, suicide is the second-leading cause of death in teens and young adults, only behind accidents.

Dennis Liegghio almost became a statistic himself. After losing his father to suicide when he was 14, Liegghio struggled with depression and his own thoughts of suicide for years.

A song he wrote helped Liegghio grapple with his grief and became the inspiration for much more. He used the song—called No Resolve—as a springboard to starting a nonprofit with a similar name.

Through his work with KnowResolve, Liegghio shares his story, his song and the fundamentals of suicide prevention with teens and young adults in Macomb County and surrounding communities.

“I talk about myths, facts, risk factors, warning signs and available resources,” Liegghio says. “It’s important to talk openly about suicide if you’re concerned about someone. Just being heard can be the first step toward healing.”

Since starting KnowResolve in 2007, Liegghio has spoken to nearly 12,000 students a year in middle schools, high schools and colleges. He also takes his message to churches, businesses and community events. In addition, KnowResolve hosts a support group in Clinton Township for survivors who have lost a loved one to suicide.

Founded in 1917, First State Bank will observe its 100th anniversary in October. Each month until then, it will donate $5,000 to a different local nonprofit. Honorees are nominated by bank employees and evaluated according to community impact.

“Macomb County has been our home for 100 years,” Lovell says. “As the hometown bank, we’ve always felt a special responsibility to support organizations that share our desire to invest in the well-being of our community.”

To donate to KnowResolve or for more information about youth suicide prevention, please visit the organization online.

To speak to someone immediately during a crisis, call the National Suicide Prevention Lifeline at 800-273-8255.